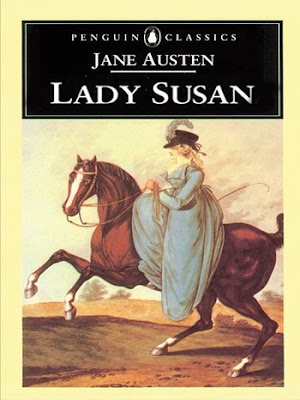 Lady Susan, an unpublished novella, one of the most minor of Jane Austen’s works and is still full of nuance, wit and character. I wish I could write something like it now, let alone at nineteen.

It uses the epistolary form in that way eighteenth century novels managed, but nineteenth and twentieth didn’t - it uses the different characters of the letter writers to shine different facets on the same event. Not partaking of the breathless, over-writing of Clarissa, the letters flow regularly but not insanely.

They deal with Lady Susan, the ‘most accomplished coquette in all England’ and her machinations and manoeuvrings following the death of her (obviously ineffectual) husband. In her scheming, her lying, her charm and the peculiar coldness to her child, she reminded me a great deal of Vanity Fair’s Becky Sharpe, but written as if the author actually liked her.

Austen clearly has a fondness for Lady Susan. Aside from getting all the juiciest lines (which she utterly does), her end isn’t a complete fall and the other characters are equally in awe of her skills as they are scared of her. It is Lady Susan who gets to practice the arts of ‘captivating deceit’ and I think it’s impossible to dislike a character who says; ‘There is an exquisite pleasure in subduing an insolent spirit, in making a person predetermined to dislike acknowledge one’s superiority’. The key here being superiority, she is better than everyone else.

Her main rival is Mrs Vernon, her sister-in-law, who can do little but passively report on the doings in her own house to her mother. The main battleground is her brother, Reginald. He is the one predisposed to dislike Susan, but she quickly wraps him around her finger, feeds him plausible lies and makes him dote on her. She makes it clear to her friend, Mrs Johnson that she is mainly playing his feelings for something to do, her real inclination being for the (currently married) Mainwaring.

Her other rival could well be her daughter. Fredericka is sixteen, has been in and out of school and, it seems, purposefully raised to not be particularly good at anything. Lady Susan tells her friend that Fredericka ‘will not remain long enough at school to understand anything thoroughly.’ The main problem for Lady Susan is that having a daughter entering marriageable age makes her look much less marriageable, so she does everything she can to bring her daughter down. Mrs Vernon, the sister-in-law is greatly taken by Fredericka, which is all fine to Lady Susan, as they are as insipid as each other.

One of Lady Susan’s other problems is Sir James, a foolish ‘rattle’ who mixes ‘more frequent laughter with his discourse than the subject requires’. He has attached himself to Susan and it is her wish to transfer this rich but idiotic lover on her weak, pathetic daughter.

A mix up with London houses, a convenient attack of gout and a mix up of letters means that Reginald finds out the truth of Susan, and she ends up marrying Sir James herself. While she is the cleverest person in the book, and lumbered with the stupidest, she hasn’t exactly landed on her feet - but we are left feeling that Lady Susan will probably find a way to exploit that stupidity to the best of her advantage. That said, in marrying Sir James, it does make it harder for her to live a free and flirting life - meaning that in this book, marriage is not the happy ending. A nice quirk.

This is a very quick read, and the subject of a very enjoyable film from 2009 called Love and Friendship, which is discussed in a video on my youtube channel. I highly recommend both.