One of the mysteries of ‘Something New’ was the name of the author. The given name was Automathes, which I judged as a mixture of ‘polymath’ and ‘auto’ - as in someone who is a polymath automatically.

It didn’t take much googling to find the man’s name, Richard Griffith. It took far more effort to find more about him. Unusually, Richard Griffith’s details were found under the entry for his wife - a very unusual circumstance.

His wife was Elizabeth Griffith, a Welsh lady who had a more successful Grub Street career than him. She wrote a number of successful novels including ‘Lady Barton’ and ‘Juliana Harley’ as well as works on Shakespeare. 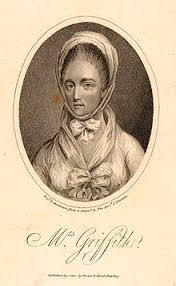 This is Elizabeth Griffith, I can't find one a picture of a Richard Griffith who isn't the guy who played Vernon Dursley in the Harry Potter films.

It seems they went separate ways, at least intellectually, but there was one other book they wrote together. It was called, ‘The Triumvirate or the authentic Memoirs of AB and C’ and was published under then name Tri-Juncta. The same Tri-Juncta that becomes a running theme in ‘Something New’. Of course, a large part of one of his book was to promote another one. Even ‘The Posthumous Works of a Late Celebrated Genius, Deceased’ was another Griffith effort. He even quotes parts of his wife’s plays in ‘Something New’.

She died in 1793, he ran off with a young heiress but didn’t marry her before dying - in an unknown date.


Does knowing anything about the author of ‘Something New’ help in any way? It explains a little why some of the essays were chosen. That said, I feel I know more about him from ‘Something New’ then by researching about him - I will now seek out as much Richard Griffiths as possible. He seems to sum up Grub Street in some very pure way.

Email ThisBlogThis!Share to TwitterShare to FacebookShare to Pinterest
Labels: Something Else, Thoughts