CBC Discovery Day and Georgians Revealed at the British Library

On Saturday I took myself to the CBC Discovery Day II and talked about ‘Odes to the Big City’ with an agent. I also went along to the British Library to see their ‘Georgians Revealed’ exhibition.

First was my trip to Foyles. I took my new disgusting ‘tache, first page of my book and some scribbled notes and presented them to Anna Davis of Curtis Brown (who also happened to be the person I spoke to last time). This time I had been organised enough to book myself a place.

I gave her a warning, telling her that I was pitching what every agent must surely be looking for, an eighteenth century picaresque novel. I then outlined poor old Sidney and his plight and emphasised links between the eighteenth century and the twenty-first that would make the book relevant to a modern reader. I compared Grub Street and the unlicensed print explosion to the internet and the similar fears both created. I compared crowdfunding with subscription and I noted that the gap between rich and poor was widening into eighteenth century proportions. Then I showed her my page.

She read it and I tried not to watch her. She described the writing as ‘fun’ and ‘lively’, both words she used about ‘Death of a Dreamonger’. She said I had no issues with my ability to write interesting and readable prose, even when I was trying for a more eighteenth century register. She said the writing was like a rich pudding and enjoyable as it is in parts, it might be too heavy to sustain for a novel.

Then she told me she thought the title weak. I have always had a problem with titles.

Next I went to the British Library with a friend to see the exhibition there.

It was pretty brilliant, there was the thrill of seeing Jane Austen’s own tiny spectacles and a few genuine clothes, shows, tea equippage of the era. I loved the miniature children’s library with books like this; 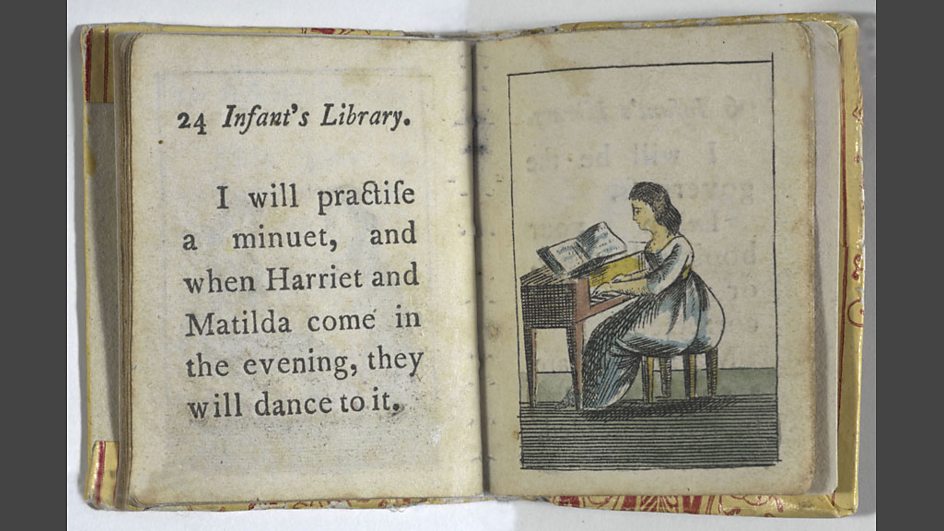 The object that made us laugh the most was a trunk where a regency rake had shoved all his bills throughout his life, leaving them all to a friend before scarpering to the continent. It was the details like that which brought the exhibition to life.

What I most loved about the exhibition was the chance to see many ephemeral pieces. There were trading cards, service listings and stock books. I smiled to see a couple of bonds for the South Sea Company. You could see in a shopkeeper’s own hand what was selling and how much it was. For example, there were six grades of coffee listed from ‘premium’ to ‘threash’. I also smiled at the list of snuffs, knowing that I had tried at least three of the flavours. There was a book of props and settings from Drury Lane, as well as tickets, benefit tickets and flyers. There were adverts for exhibitions and shows, like the rhinoceros and the learned goose.

There were broadside ballads; letters from Austen and Fanny Burney, Chippendale catalogues and examples of the weekly magazines. It was striking how funny much of the material was, anybody who was reading what was on display was smiling and laughing regularly, calling their mates over to see this or that funny thing.

I was also struck by how books were used by the middle classes as an improving tool. There was the only copy of ‘The Rudiments of Genteel Behaviour’, self-taught language and music books and, most confusing of all, self-taught dancing books covered in intricate and almost impossible diagrams.

Finally, the exhibition ends with a huge copy of Roque’s map covering the floor. We spent a long time tracing the streets we knew and imagining what an area must be like (the one with four tanning yards back to back didn’t seem very inviting). Then in best eighteenth century tradition, we went to the country air of Highgate and had a few drinks.

Here's a link to more information about the exhibition.
http://www.bl.uk/whatson/exhibitions/georgiansrevealed/index.html

Email ThisBlogThis!Share to TwitterShare to FacebookShare to Pinterest
Labels: Into the Big City, Reviews, Trips