Review: The Citizen of the World by Oliver Goldsmith Citizen of the World was first published in the Public Ledger in 1760 as the Chinese Letters, it was the first thing of Goldsmith’s I ever read and it set me on a path of fondness and love for him and his writings.

It takes a similar form to Charles Secondat’s Persian letters in which a foreigner from a far off land comes to a European country and writes the things that they observe. It is the perfect form for Goldsmith, allowing him to flit from idea to idea and from style to style. He can satirise everything from the tour guides of Westminster Abbey, the taste for exotic chinoiserie, weak stoicism against bad events and the urges to charity. It is less grand in scope and language than Johnson’s Rasselas, more limited in focus to the here and now of eighteenth century London but as such is a warmer and more humane work.

Running through the letters are the story of Lien Chi Altangi, a Chinese scholar who takes himself off to become a citizen of the world and to sample the exotic delights of London. This gives Goldsmith the chance to use his foreign eyes to poke fun at a variety of fashions and notions as he explores. He makes great use of Altangi’s innocence for ironic laughs, like when he supposes that only the morally superior must be buried in Westminster Abbey over those with money; or when he is under the impression that English women must be very friendly and keen on foreigners when he meets a group of prostitutes.

This in itself is amusing enough and for someone writing a book set in a London with a heightened reality, very useful, but Goldsmith doesn’t stop there. He manages to also laugh at Altangi himself. His act of taking himself off into Europe has had dark consequences for his family, they have been persecuted in his stead and his son has run off to find him but been captured by Barbary Pirates. This allows Goldsmith to point out the selfishness of Altangi’s selfless act of trying to be a citizen of the world, it also allows Goldsmith to include essays that purport to be the writing’s of Confucius. These Confucian writings are full of trite stoic phrases and notions, they are the same brand of bland positive thinking that people still peddle today and they are nailed perfectly.

The dullest letters are ones from Altangi’s son. These tell the sentimental tale of his capture, his slavery under a vicious sultan and his love for a fellow slave, a pure Christian woman. In grand sentimental style he and the woman are split and joined several times before being united and married in London in the last letter. These are only dull as they are pretty standard sentimental tales but luckily all the letters are short and scattered among the jucier ones.

Altangi meets many one off characters; from the previously mentioned tour guide (who pops up in my own book) to a lady who has a passion for all things Chinese. Her passion includes inviting the Chinese man to tea, who is appalled by her lack of taste and how she is mixing all the order of China into an exotic melange.

Altangi also meets two companions who return a few times. One is a man known as ‘the Beau’ who pretends to great wealth and fashion, claiming to be on good terms with all the rich and famous but is actually a poor starving man. He and his wife never admit their poverty but carry on with full airs and graces. There is one very funny (and unkind) chapter where Altangi is invited to their house for dinner, there is no dinner and barely a house but the couple proceed regardless. It is interesting to note that Goldsmith wrote the ‘Life of Beau Nash’ about the same time.

The other companion is a character I learned to like very much, the Man in Black. This man is a common trope now, he always dresses in black and has a nasty or cynical word to say for everything but he has a heart of gold which he is very poor at hiding. Altangi notes how he can walk down a road expressing how good greed is and what a pitiful thing charity is but can’t help finding ways to give charity even at his own expense. At the end of the book, with the son married off and Altangi deciding to stay in London, the Man in Black is now his close friend - and the reader’s.

Finally, in the preface to the book, Goldsmith writes one of those passages where he and I seem to agree completely and encourages me to love him more.

My earliest wish was to escape unheeded through life...I am too savage to court any friends by fawning; too obstinate to be taught new tricks; and too improvident to mind what may happen: I am appeased, though not contented. Too indolent for intrigue, and too timid to push for favour. I am - But what signifies what am I. 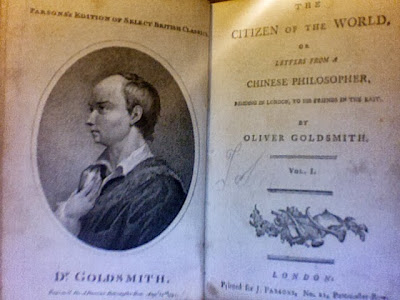