The Problem of Quotes

“A man is but the product of his thoughts. What he thinks, he becomes” - Mahatma Gandhi.

“Do you want to know who you are? Don't ask. Act! Action will delineate and define you” - Thomas Jefferson.


Two seemingly persuasive quotations from two people with a reputation for telling the truth, each one on its own could be easily quoted, agreed with and used to steer thinking in a certain direction. A person could even fully endorse each quote and different times with equal conviction but they directly contradict each other.

I'm a big fan of quotations, I have keeping a commonplace book this last year, full of juicy chunks I've read in various books but I do sometimes feel a little queasy about them. A quote is pulled out of a larger text or speech because it is self-contained, it takes a view and boils it down in a concise and coherent way, its very tightness is convincing. The ease with which a quotation can be plucked out of a text can prevent any real thought about the meaning of the quote, the implications of the idea being espoused and the context where the quote comes from.

Around my clock I have written and laminated the following quotes. 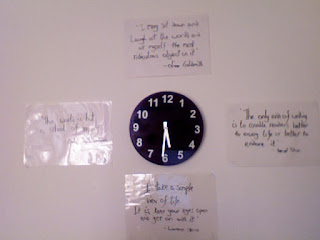 (At 12) 'I may sit down and laugh at the world, and at myself - the most ridiculous object in it.' Oliver Goldsmith


(At 3) 'The only end of writing is to enable readers to better enjoy life or better to endure it.' Samuel Johnson

(At 6) 'I take a simple view of life, it is, keep your eyes open and get on with it.' Laurence Sterne


(At 9) 'The world is but a school of inquiry.' Michel de Montaigne

I use them to remind me of the attitudes I find important much as a Christian Orthodox believer would use an icon to remind them of the right-thinking and doing actions of the saints. The quotes can be taken together or singly to create a basic picture of how I would like to deal with the world; playfully, kindly, straight-fowardly and curiously. I must look at those quotes several times a day, if only in the action of looking at the time and so must in some way be reminded of these quotes every day - but I don't even know where they all come from.

The Goldsmith quote is from one of his letters and comes from a very funny self-pitying epistle where he also says that, 'An ugly and a poor man is society only for himself and such society the world let’s me enjoy in great abundance'. It reminds me to laugh but also to remember that you are as risible as everyone else.

The Johnson quote is from his review of Soame Jenyns, where he tears into the author for his theory of evil, especially the notion that evil and unpleasantness may be part of some grand tapestry for God to enjoy. I use it to focus my writing but also as a way of assessing my reading.

The Montaigne quote comes from an essay but I can't remember which one, I can't even remember the context. What's worse is that Montaigne never wrote those words, he wrote something like them in French.

The Sterne one is the most mysterious, I read it on a quotations website but have no idea where it is from. I've read his two novels and can't remember it in there, maybe it is from a letter - maybe it is in one of the novels and I have forgotten it.

Which brings me back to the problem with quotations. Those words on my wall could be from anyone, they could come from any text, so could all the quotations bandied about all over the place. Once wrenched from their own body of text, the words have next to no meaning in themselves, they exist now only to have meaning foisted upon them out of context by the person using the quote. If a text is a dialogue between writer and reader, a quote becomes the reader talking themselves through a hand-puppet dressed up as a writer. It ceases to be the authentic voice of writer communicating.

Will this stop me collecting quotes or cause me to take them from my wall, not at all, because sometimes talking to a hand-puppet is the best way of clearing up your own thinking, because in the end it is neither our thoughts or our actions that define us but the authentic reflection of one on the other.