My copy of the poem was in this book, alongside some interesting essays.


Yes, it’s an extended poem about walking around London but that doesn’t necessarily mean it is crap - it rhymes at least.
John Gay takes the part of ‘The Walker’, a seasoned perambulator of the mean streets of C18th London. He tackles weather, cheats, pickpockets, porters carrying heavy goods and fops and dandies covered in powder. Never aiming to get somewhere in particular, he gives us advice on the perils of the city whilst observing its inner workings.
The poem is organised into three books, the first is about the preparations for walking, the second about walking in the day and the third about walking in the night. The poem has little summaries down the sides of the text, allowing you to navigate it. These summaries seem to serve a similar role to the long chapter titles of some C18th novels. They include such things as; ‘of walking with a friend’, ‘signs of rainy weather’ and ‘useful precepts’. The informative nature of these summaries help create the effect of a ‘how to’ book that greatly add to the ironic tone - more about that in a bit.
The poem makes hundreds of interesting points about the day-to-day life going on around The Walker. These include a description of some common pickpocketing practices,  advice about buying a decent coat and a particularly nice little bit about the politics of ‘giving the wall’, the wall being the covered part of the path away from the open gutters. This part reminded me an awful lot about that common urban dilemma - who to give up a seat to on a bus.

Here is a little bit about a winter danger, a rowdy game of football.

‘Here oft’ my Course I bend, when lo! from far
I spy the Furies of the Foot-ball War:
The ’Prentice quits his Shop, to join the Crew,
Encreasing Crouds the flying game Pursue.’

As you can see, this is written  nice perky little heroic couplets and these couplets trip all the way through the poem.
The poem also contains two tangents of a mythological strain. The first it the invention of little overshoes called pattens and the second is the story of how Cloacina, the Goddess of Sewers created the shoeshine boy and gave him his trade...these parts are parodies of some classical thing or other but I have to admit were lost on me. Interestingly, on my little Wikipedia look at Cloacina, it turns out she was worshipped with rhymed prayer. 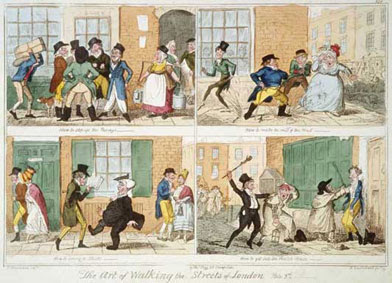 While you would have to be a very worrying type of person to laugh out loud at this poem, it does create a very nice ironic tone between the trivial subject matter of going for a walk and the deadly serious manner it is portrayed. From the title, ‘The Art...’ to the tone of The Walker’s advice, the poem pretends to be a useful and instructional manual for walking around the city - something most of the readers would be used to doing.

This allows Johnny Gay to do a few things; the first is to poke fun and dramatise the chaos of the city with it’s hubbub of life and movement. The second is to mythologise the small things in life, to bring them to centre stage, a preoccupation in Gay’s work (and Scriblerans in general). The third is to satirise the new strain of people who were using the new urban medium of cheaper books and daily newspapers to set themselves up as experts, he does this in the character of The Walker.
The Walker is a bit of a prat. He starts off self-importantly pontificating about the correct types of shoes, coats and canes to wear and carry for a good walk. He presents himself as the debonair man about town but has no part or place with everyone else. He derides the people that ride and carriages and sedan chairs, saying that walking is the finest way to get places and yet complains about all the obstacles that get in his way. His friends, incidentally, found it hilarious that Gay should have a success with a book about walking where he would have ridden everywhere if he could.

Finally, The Walker presents himself as a tough and streetwise traveller but spends most of his walk fearing and fussing over dirt. In short, he is the kind of know-all-know-nothing sort of expert parading his knowledge for a disinterested audience on a plentiful but cheap mass media object - so an arrogant blogger then, or a TV chef. It is through reading the poem in this light that is probably most enjoyable for the modern reader.

To sum up:
Although not a scintillating page turner, ‘Trivia’ manages to be an entertainingly wry read and an evocative slice of London Mythologising. Best read accompanied by ‘The Four Times of Day’ engravings by William Hogarth before leaving the house for a ramble and paying attention to your own area.