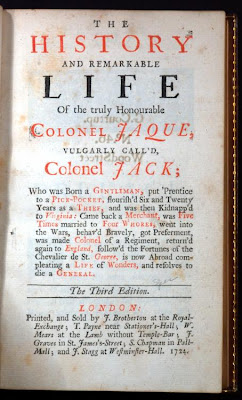 Colonel Jack the book is a bit like chewing gum, it bursts forward with plenty of flavour before losing that flavour and becoming bland drudgery; just chew, chew chew.
The first half, the flavoursome half, begins with the birth of Colonel Jack, the bastard son of some gentleman. Jack has been farmed away to keep him from shaming the family. He is nursed by a lady who also has a son called Jack. The two Jacks are joined by another bastard called Jack and the three boys begin to be known by their nicknames; Major, Colonel and Captain.
The boys are left to the street when the kind nurse dies and live in complete poverty, begging for food and sleeping in the sooty grime of a glassblowers – they are also extremely happy with their lot. The Jacks develop different personalities, the Major is a friendly, genial boy easily led astray, the Captain is a rough brutish boy and the Colonel is generous and clever, but the most naïve.
The boys are pulled apart to try different crimes, the Major and the Colonel apprentice themselves under different pickpockets and the Captain joins a gang of kidnappers. Our hero, Colonel Jack, sees this as just another kind of living and works diligently at it, the way he would had he become the apprentice of a more respectable trade. We do not hear much of the Major after this point.
After twenty-six years of pickpocketery, the Colonel joins a group of highwaymen, his disgust at robbing an old lady mean that he decides to give up his life of crime and join the army. At this time the Captain turns up on the run and they run north to Scotland together. The Colonel becomes extremely upset at the Captain’s inability to hold back his criminal tendencies. Cornered in Scotland, they take a boat back to London but it turns out the boat is actually heading for Virginia and the young men are indentured servants, white slaves on the plantations for a fixed period of time. Now it is the time for the Captain to leave the story and never come back.
Up to this point the book has been thrilling. The lives of the raggedy street-urchins are vigorously and directly described. The descent into crime is even more interesting, as the Colonel learns the tricks of the trade, we learn them with him. We learn what is a good haul for a day in other people’s pockets, how to redeem someone else’s banknotes and when an amount is too much too handle. Moll Flanders has a similarly interesting section. Unfortunately the story begins to run out of steam in America.
At first we get the very interesting account of the white slaves of America, how criminals and the destitute went to that country as slaves for a fixed period, to then be given some land to carve for themselves. That the colonies are full of ex-cons doing very well for themselves. The Colonel then becomes an overseer, as overseer we get the interesting black/white divide. The whites are only temporary slaves and can be reasoned with, the blacks are permanent slaves and only respond to the whip. The Colonel makes the revolutionary discovery, treat the blacks as people and they will respond likewise (and not laugh behind your back, as common wisdom had it).
Unfortunately for the reader, the Colonel is freed from slavery to become a prominent merchant and land owner. He also discovers religion, and like Cliff Richard after him, he loses his bite and doesn’t regain it. After a whole bunch of religious stuff, where even he gets bored, the Colonel goes to Europe to join some wars for the fun of it. He marches around a bit, marries a few times and then sails back to his plantation. Then he gets involved in some trade disputes with the Spanish, which trebles his wealth and the novel ends - it really does just whimper to a close.

The character of the Colonel is an interesting one. He is an innovator and a pretty optimistic soul. He sees something and improves it, often in a humane way. He has a photographic memory of everything he ever stole, those items obviously being of worth to him as prizes as well as food. He has a notion that Defoe seems to admire of ‘just getting on with it’. He’s also a bit like Del Boy, moving from one thing to the next knowing that ‘this time next year, we’ll be millionaires’. Like Del Boy, the Colonel is a chancer, willing to take any opportunity.


Weirdly for one of these books, he never finds his old family or inherits off them or anything…not sure if I am disappointed or pleasantly surprised. It does emphasise the fact that, at this stage in its progress, the English novel (or the species of writing that will become the English novel) is more a vaguely logical construction of events rather than what we would recognise as a plot.
This lack of a plot is a fatal flaw to the enjoyment of the book as a whole, but that is not to say it is not an enjoyable book - it is actually very enjoyable. Defoe’s wish to create and maintain the verisimilitude of the book means that we get hundreds of fascinating details about every aspect of the Colonel’s life. The reader gets an apprenticeship into c18th crime; a revised ‘how-to’ manual on how to treat black slaves; an account of being a merchant and all manner of interesting details.

I think Defoe was missing a trick with his three Jacks, if he had kept all three going, comparing and contrasting their lives throughout, there may have been more feeling of structure - although that may have introduced too much artifice into the story and taken away from the realistic tone.
Yours