An Attempt at Art

I may write fiction, but I am no artist. Certainly not a visual one.

I have dabbled in painting, however when I do, I tend to dabble all over the house and make a complete mess. I also only create paintings that only the creator can love. 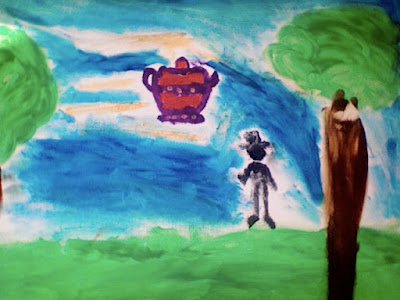 This one is of a man saluting a flying teapot, it was a prop in a short play I wrote (and directed). It's probably my most technically superior painting, I am just too clumsy for it.

However, that doesn't stop me having 'arty' thoughts, like when I bought a complete set of Encyclopaedia Britannica for a couple of quid so I could doctor them into a personal encyclopaedia of the things I love. Instead I just have a set of heavy unread books kicking around the house.

Similarly, when I was at my friend's new house in Blackburn, I spotted a picture in his back garden. The picture was a very cheap reprint in awful condition, the previous owner of the painting (and the house) had been a 60 a day woman and not much of a cleaner. Add to that the painting in itself was painfully kitsch, fake and creepy in the finest Icky-Victorian way.

It was a copy of 'Special Pleader' by Charles Burton Barber. It normally looks like this. 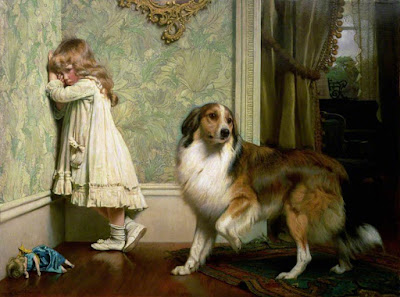 I carried it on the coach back to London, and the bus from my place and hung it on my wall as a slightly campy statement of bad taste (the same kind of taste that lead my housemate to rescue a chaise-long style telephone table from a shed.)

Today I decided to alter it, but having trouble with painting on it, I decided to collage and rooted around the house and changed the original into this. 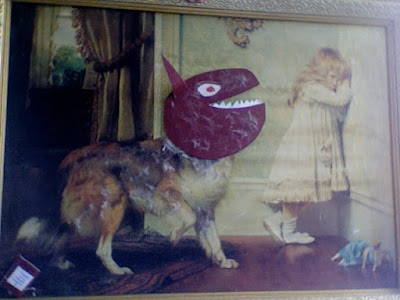 I like it very much. Here is a close up of the monster. 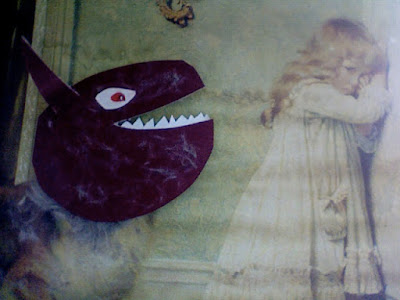 And here is a close up of a little miniature book I made and placed in the corner. 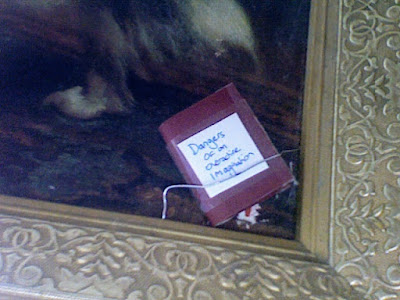 The book is called, 'Dangers of an Overactive Imagination' which is what I consider the girl in the picture probably has.

It's a proper little book, with a proper leather-etter cover and pages, so now I'm going to write it and then my masterpiece is finished.

Here is the poem in the book - the vagueness of the poem stems from the fact you are supposed to be looking at the picture at the time.

Dangers of an Overactive Imagination
Is it there?
Do you think?
Is it really there?
Can you smell it’s sour breath?
A monster-ghoul-fiend?
A pacman?
A dog?
Or just a metaphor for death?
Is that a smile?
A grimace?
A generous grin?
Or something far less benign?
Is it licking it’s lips?
With joy?
With pleasure?
Wishing to chew on mine?
It’s all in the mind.
Perhaps
I hope
And if I don’t look it’s not true
But I can see without looking
It’s there
I know.
There’s nothing that I can do
If it is in my mind
I can’t escape.
And if not...
The End


Here is a video of the poem that goes with it.

Email ThisBlogThis!Share to TwitterShare to FacebookShare to Pinterest
Labels: Art