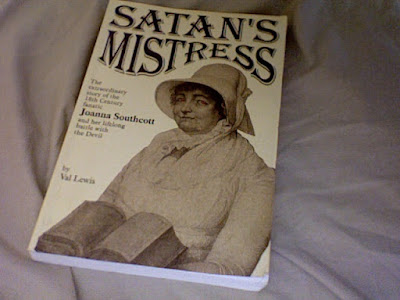 The title was the first thing that stood out about this book; ‘Satan’s Mistress’ sat in the nautical theme shop amongst the books of naval history and behind the case of barometers. Odd title to have in a nautical gift shop; odder too that on closer inspection it was published by the shop itself, odder still, the portrait on the front cover has holes where the eyes are so bright red backing behind can shine through, giving her evil eyes, and oddest of all, the blurb contains a prediction for the end of the world... to have taken place seven years ago. 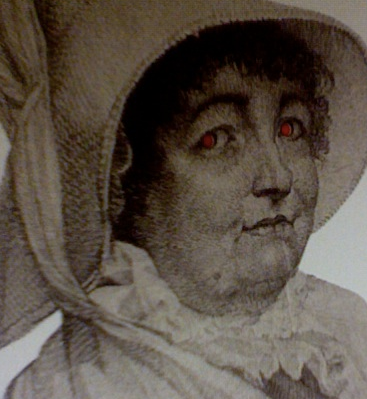 The eyes! The eyes!


Satan’s Mistress is, in theory, a historical biography of a religious fanatic named Joanna Southcott active at the end of the eighteenth century. I knew a little about her - that she believed that she had borne that son of God, that she had predicted his future return, that there were still believers who owned a house somewhere in the English countryside awaiting his return. This book is not written by one of her believers, this book is written by someone who believes that Joanna was seduced by the devil and her acts and her prophecies, though real, were gained by diabolic means. Not a completely ordinary historical biography then, but one so fitting to it’s subject and so provoking when it comes to the idea of biography itself.


But before all that, diabolic pacts aside, what do we learn about Joanna Southcott? She was a country girl born in 1750 of reasonable but not stupendous means and a basic education. She was attractive and devout, with a fervent desire to be of use to God, but a certain vanity also. Her vanity is evidenced in a number of well documented examples of courtship, where she played a number of men around on a string until they became fed up of her or married someone more pliable. It was at a young age, the author suggests, that Joanna was first contacted by demons, who prayed on her vanity and her true and ardent desire to play a part in God’s kingdom. She grew into a typical spinster, good with traditional lotions and cures, and she wrote doggerel poetry when she got stressed. One of her publications.


She became convinced that this doggerel was from God, and managed to convince other people. When the prophecies in the poetry started to come true, she started to grow in fame and recognition but what she craved most was recognition from the established church. She approached many ministers, cursing the Bishop of Exeter when he refused to take her seriously as God’s prophet etc..etc.. he died less than a year later - her followers nodded and said ‘I told you so’. (If you can name the book referred to in the wording of that sentence, I will love you forever and we will be best friends).
She fixed her main sights on a handsome cleric called Joseph Pomeroy - who she decided would be her John the Baptist. He humoured her at first but eventually became disgusted by her, and she hounded him for the rest of his life, tarring him with her brush. Luckily for her not everyone was against her and she succeeded as the leader of a fanatical group formally run by a Richard Brothers. Her new followers took her to London and treated her as the prophetess she believed herself to be. She gathered a box of prophecies that she added to throughout her life and would continue her name after her death.


She also amused herself by eating, creating church services that added her works to the praise, creating 14,000 official followers by giving them a seal that was regarded as a passport to heaven and sewing a quilt meant to curse King George III for not listening to her. She claimed the quilt was the thing that drove him mad.

But time went on and inevitably, her fame faded. By queer coincidence, this is when she revealed that she was pregnant with the son of God despite being a virgin. She did grow bigger, her belly did kick, she certainly had weird cravings. Medical professions examined her (in the bounds of propriety) and most of them agreed, probably, possibly, she was pregnant and a virgin. As the time approached, interest in her and her baby - to be named Shiloh, increased but obviously not enough - because there was no baby. It was later claimed that he was born, but as a spiritual being. Shortly after that, Joanna, who was going to live forever, died and that was it.


But not for long, because her box of prophecy, sealed until the official opening (done in the presence of the right number of clergy) was being passed around and the rumours of the coming of Shiloh still current, and so it remains till today. Rumours of the box, rumours of Shiloh and rumours of the end of the world continue up to this day and there are still believers.

An undeniably fascinating story - and presented in wonderful detail by the writer of the book - but there is also the belief of the writer that Joanna was actually tricked by the devil and not a charlatan or deluded. It is this that makes the book rise from an interesting story well told to a fascinating look at faith and biography. The author is presenting (as she sees it) a true biography of  a woman but includes beliefs many find hard to believe - it brings alive the whole issue of relationship between reader and book. When reading a biography it is usual to think that the realtionship is between the reader and the subject of the book, and we forget the author of the book, the ideas that they have about the subject, their own interpretation of the person we are reading about.
I am considering writing a biography of Oliver Goldsmith, the last major biography of him was most recently revised in 1969. Now, I fell in love with Goldsmith in his clumsy and endearing appearances in Boswell’s Life of Johnson (and there is a fascinating essay to write one day comparing Johnson biographies) but the biography of him I am now reading contextualises Goldsmith’s behaviour in whole new ways. My relationship with the man is wholly reliant on the interpretations of others, even his own work is changed by suggestions of others in biography and it is not until you read a biography where the author has a completely different view of the world to you that you start to properly question what you read.
This raises a very interesting book to a fascinating one, and I recommend it to any discerning reader who can find a copy. Also, anyone interested in Joanna’s own writings (containing prophecy and poetry) a modern day Southcottian has uploaded many of them to the web here.

(Very incidentally,  I wrote the review of this book during the last year that the modern Southcottians, the Panacea Society, existed. Their last member died the year after I wrote this and the house that they bought for Jesus, and the £14,000,000 of investment they bought in Bedford, which they believed to be the Garden of Eden, is now a charity. The charity has a museum with Shiloh's cot and the box of prophecy in it.)