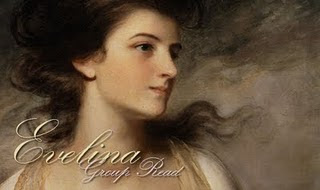 I'm reading Evelina by Fanny Burney as part of a reading group for The Duchess of Devonshire's Gossip Guide to the C18th, this is my expanded thoughts.
Poor Ol’ Willoughby; so maligned, disliked and distrusted and all he wants is to have a good time. I have quite a few mates like Clement; funny, charming, the centre of the party and rather shallow. Great for a drink but awful as a confidant. I am drawn to people like this, I like their energy, their sense of fun and their lust for life, but people like this do not think about the their actions and what may seem like an enjoyable and amusing game of courtship to him could seriously and permanently injure Evelina’s reputation. It’s not that he means any harm, I think he’d be quite shocked if he thought his actions could be read in a malicious way, which is exactly what makes him so unpredictable and dangerous. Flattering and adoring is nothing more than banter, turning the carriage around, a bit of sport and pretending to mug an innocent, if odious, old lady something to tell the lads in the pub later on.
Am I picky in saying the prank does not actually contain a real robbery – as the women were convinced to leave their cash and valuables at a pub before setting out and had them returned. I think this little instance shows that Captain Mirvan does have some limits, that he will not rob a lady but he will scare here half to death and truss her up like a goose for his own amusement…and what about Evelina? Knowing what is really happening the whole time and not saying anything about it? This reminds me of Samuel Johnson’s comment on courage, "Unless a man has that virtue, he has no security for preserving any other." And also makes me think of the completely unenviable position a woman was in then.
As for Evelina, I think her actions at the opera reflected badly on her. Yes the Branghtons are vulgar and rude and embarrassing, but her problems and scares with getting in a coach with a lone man, stem from her trying to get away from them. However, (and maybe this because I feel I am more a Branghton than a Lord Orville) I found their objections to opera (it’s silly, stilted and they don’t even sing in English) to be rather sound and I find their honesty and directness far more pleasing. For Evelina to be so utterly mortified about them seems more like prissiness to me, snobbish prissiness at that. As the orphaned, unmonied ward of a country clergyman, it seems a bit of a surprise that only earls, lords and dukes are cultivated enough for her. I have embarrassing relatives, but they are my family and I can enjoy their company – why can’t Evelina? (My opinion of both Evelina and the Branghtons changes as we go on however.)
Poor Evelina has had a bit of a time of it, and we know it’s only going to get worse…
Yours